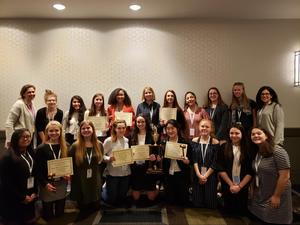 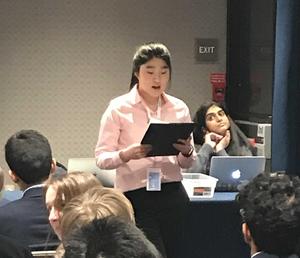 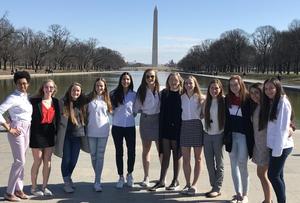 4 days, 50 states, 15 countries, and 5 continents...
From February 14 through February 17, Trinity Hall juniors and seniors, along with students from all 50 states and 15 different countries spanning 5 continents, converged on Washington D.C. to participate in the North American Invitational Model United Nations Conference (NAIMUN). Two weeks later, ninth and tenth graders from Trinity Hall traveled to Philadelphia’s historic district for the Philadelphia Model United Nations Conference (PhilMUN). Their goal was to achieve conflict resolution for global issues using diplomacy and cooperation as delegates of United Nations member states.
At NAIMUN, Trinity Hall delegates engaged in dialogue, negotiations, and resolution writing to creatively work towards solutions in areas including nuclear terrorism, human rights, climate change, the regulation of space debris, sustainable tourism in conflict zones, and global health security. Delegates also revisited historical crises such as those facing the Brazilian Cabinet of 2016 and the British House of Commons of 1945.
During PhilMUN topics included the exploitation of labor, the feminization of poverty, refugee rights, trafficking, discrimination, the development of infrastructure, entrepreneurship, and terrorism.
Some of our future leaders expressed their takeaways following this simulation in global geopolitics:
"It was a great opportunity because I was able to interact with many people around the world and discuss the topic of nuclear terrorism which is relevant in our world today. Moreover, I was able to grow from my past public speaking MUN experiences because my committee was the largest one at the conference." ~Riley Dunfee '20
"It was a really fun learning experience as my first time in an advanced committee. I was able to learn how the UN works and practices diplomacy. It was also interesting to see the different perspectives by country on different issues." ~Lucy Retterer '21
"Attending NAIMUN was a great experience. It was very rewarding to collaborate with those in my UNESCO committee and create sustainable tourism standards for countries around the world. We decided that these standards should focus on preserving culture, combating over-tourism, and protecting the environment. Many delegates in my committee were from other states and even countries, which made the weekend even more exciting because I was able to get to know so many people from very diverse backgrounds in just four days." ~Mary Kate Cashman '20
"Working with peers of the same age with all international backgrounds was an experience in which I feel everyone should have the opportunity. I became aware of how culture affects different view points and especially how it affects the way people present themselves and their arguments. Our committee really understood the dangers of nuclear terrorism and not only addressed the dangers of nuclear weapons, but formed ideas on how to prevent and initiate change globally." ~Kylie Hall '20
Click here to view the full photo album!
More info:
The North American Invitational Model United Nations (NAIMUN)
Philadelphia Model United Nations (PhilMUN)