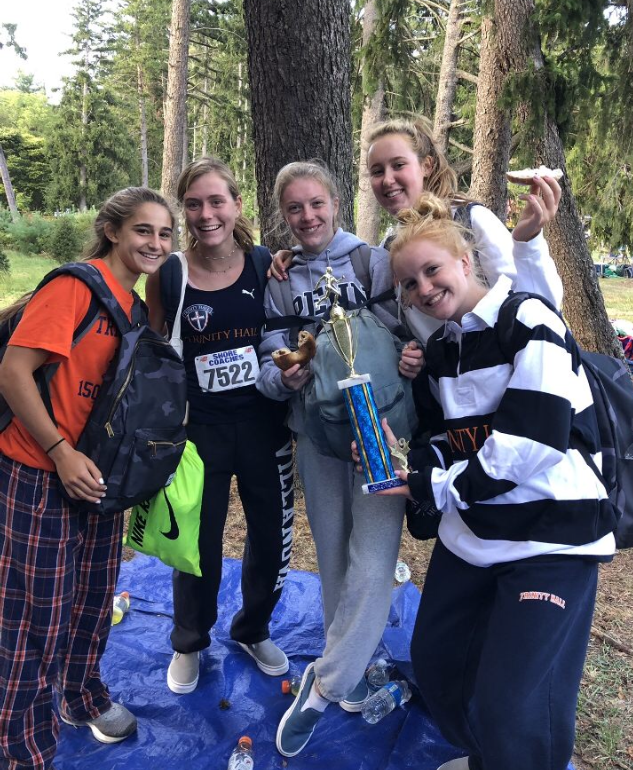 Cross Country: Battle of the Classes at Ocean County Park, 9/13/2019
Score: Sophomores placed 2nd for the Battle of the Sophomore Class
Monarch(s) of the Meet: Haven Dora '22 and Madeline Barber '22
Utilizing pack running to lead the Trinity Hall sophomore class to a second place finish, Haven Dora '22 and Madeline Barber '22 ran with a lot of grit at the Battle of Ocean County Park. Among a competitive field of sophomore runners, Haven and Madeline ran strong to place 8th and 10th, respectively. Haven was the top finisher for the Monarchs and recorded a time of 20:04. Madeline had the next fastest race for Trinity Hall with an impressive time of 20:11. These strong sophomore runners look to lead the Trinity Hall team to greater heights this season.
Highlights:
The Trinity Hall XC team ran against a competitive field of New Jersey schools at the Battle at Ocean County Park on Friday afternoon (9/13). As Trinity Hall's official cross country season opener, the team debuted with impressive races within their own classes. The freshman squad showcased their talent, being led by Eileen Bergin '23 and Molly Marks '23. The freshman race was a two mile course, with Eileen and Molly running times of 14:53 and 14:58, respectively, and placing within the top third of the race. The sophomore class race (5k) was stacked with talent and proved to be one of the fastest races of the day. Our sophomore runners stayed competitive among a highly talented field of runners. Haven Dora '22 (20:04) and Madeline Barber '22 (20:11) led the sophomore pack by placing in the top ten and securing a second place overall team finish. Grace Child '22 and Kate Hegel '22 contributed to the sophomore's second place finish by running strong times of 21:01 and 21:54. Within the junior and senior class races, there were many notable races and performances. Ally Lawson '21 ran strong to place 7th in the junior class race with a solid time of 20:15, followed by Lucy Retterer '21 running a time of 22:59. For our senior squad, Olivia Almedia '20, Molly Clifford '20, and Madison Boesch '20 toed the line to complete a great day of racing at the Battle of the Classes.
Link to Full Results
Next Up:
40th ANNUAL XAVIER CROSS COUNTRY INVITATIONAL on SATURDAY SEPTEMBER 21, 2019 at VAN CORTLANDT PARK.
Published September 15, 2019