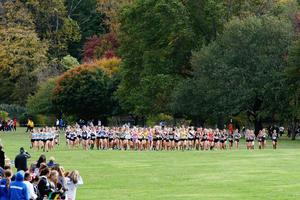 A round-up of the XC action from November!
NJISAA Prep State Championship in Blairstown, NJ on Wednesday, November 6
Score: Varsity Placed 4th in Prep “A” State Championship
Monarch of the Meet: Madeline Barber’ 22
Madeline Barber’ 22 ran a gutsy race at the Prep “A” State Championship meet. Barber placed 4th individually and led her team to an overall 4th place finish. Barber recorded an impressive time of 19:52 on a challenging and hilly 5k course.
Highlights:
The Varsity Trinity Hall XC team made the trip up to Blairstown, NJ to compete in the NJISAA Prep State Championship on Wednesday, November 6.  The Varsity team was moved up to the Prep “A” Division for the race. Madeline Barber ’22 led the Monarchs by placing 4th individually with a time of 19:52, followed by two Monarchs placing in the top ten. Grace Child ’22 and Haven Dora ’22 placed 6th and 9th respectively with times of 20:20 and 20:38. The Monarchs placed 4th overall for the Prep “A” race with Ally Perri’ 21 and Anna Ferrigine ’21 placing 34th and 35th with times of 22:30 and 22:34, respectively; and Kate Hegel placing 43rd with a time of 23:02 to complete the TH varsity squad.
NJSIAA Group Championship for Girls Non-Public “B” on Saturday November 16 at Holmdel Park
Score: Varsity placed 2nd for Non-Public “B”
Monarch of the Meet: Anna Ferrigine ’21
Anna Ferrigine ’21 raced a hard effort at the Group Championship by running an impressive 22:29 at Holmdel Park. Anna scored as the varsity squad’s 5th runner to help her team to an overall 2nd place team finish. Her hard effort helped the Monarchs advance to the Meet of Champions.
Highlights:
The Monarchs demonstrated a lot of heart and hustle on Saturday, as they competed in the NJSIAA Group Championship for Girls Non-Public “B” division. Racing with a lot of grit and perseverance, the Monarchs battled to defend their Non-Public “B” title. A race to the finish, the Monarchs secured a spot at the Meet of Champions by placing 2nd overall, only 5 points behind Villa Walsh Academy, who took the win. The Varsity squad was led by the sophomore class, with Madeline Barber ’22 placing 4th overall with a time of 20:27; and followed by Grace Child ’22 placing 9th overall with a time of 20:54. Haven Dora ’22 placed 13th with a time of 21:17. Kate Hegel ’22 and Anna Ferrigine ’21 placed 24th and 25th, respectively, with times of 22:25 and 22:29. Olivia Almeida ’20 and Ally Perri ’21 rounded out the varsity squad by running 23:03 and 25:59 to complete a great day of racing.
NJISAA Meet of Champions on November 23 at Holmdel Park
Score: Varsity Placed 20th
Monarchs of the Meet: Madeline Barber '22 and Grace Child ’22
Madeline Barber ’22 and Grace Child ’22 ran personal bests at MOCs at Holmdel Park, with times of 20:23 and 20:48, respectively, to conclude a tremendous Cross Country season of racing.
Highlights:
The Trinity Hall XC team qualified for and competed in the legendary Meet of Champions at Holmdel Park on November 23. Meet of Champions took place on a sunny and chilly fall day. The XC meet was loaded with the fastest runners in NJ, who qualified through the NJSIAA Group meet the previous weekend. Our Varsity squad concluded their season with a 20th place overall team finish. Madeline Barber '22 ran a personal record, leading our varsity pack, with a time of 20:23. This time at Holmdel Park puts Barber as second on the all-time XC list, only three seconds from the school record. Grace Child ’22 (20:48) ran a competitive race with a personal best for the XC season. Anna Ferrigine ’21 (22:49), Lucy Retterer ’21 (23:43), Olivia Almeida ’20 (24:08) and Kate Hegel ’22 (24:11), completed our varsity pack to conclude a strong season of racing. Way to go Monarchs!
UPCOMING:
Madeline Barber will go on to compete at the Footlocker Cross Country Northeast Regional Championship at Van Cortlandt Park on Saturday, November 30.