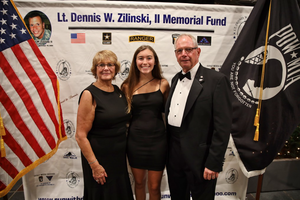 Senior recognized for patriotism and work with Wreaths Across America.
Congratulations to Jordan Codispoti ’21 who was honored by the Lt. Dennis Zilinski II Fund at their annual Toast to Dennis Gala in September.
Lt. Dennis Zilinski II of Middletown was killed in action during the war in Iraq in 2005. The Lt. Dennis Zilinski II Memorial Fund honors his memory by supporting members of the United States Armed Forces and their families. By providing scholarships, the Fund also invests in the future of high school students who embody the leadership qualities and community spirit of Lt. Zilinski.
Jordan has received the Lt. Dennis W. Zilinski II Memorial Fund Scholarship in recognition of her work with Wreaths Across America to lay wreaths on fallen soldiers’ graves at West Point Cemetery. For the past three years, Jordan has helped to cover more than ten percent of the graves there.
While this year’s gala was a virtual event, Jordan was recognized during a small gathering at Eagle Oaks Country Club on September 11. Fellow Monarch Vianna Schibell '24 sang the National Anthem that evening. The annual gala honors Lt. Zilinski’s life and sacrifice while fundraising for veterans in his memory.
At Trinity Hall, Jordan serves as the chair of the athletics council and is a member of the varsity track and cross country teams. Congratulations, Jordan!