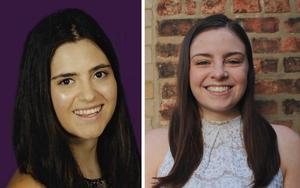 Nicole LoRusso ‘17 and Grace Molloy '17 are leading the effort to build a new support network for alumnae.

Two members of Trinity Hall’s founding Class of 2017 are now spearheading another first for the community by establishing a leadership structure for the Trinity Hall Alumnae Association. Nicole LoRusso ‘17 (president) and classmate Grace Molloy ‘17 (vice president) helped start several of the clubs and traditions today’s Monarchs still enjoy, and are excited to build a network to support Trinity Hall alumnae and students for years to come.

“One aspect of Trinity Hall that I truly valued as a student was the opportunity to speak up and propose organizations we felt the school would benefit from,” said Nicole. “Although Trinity Hall has done a phenomenal job of keeping the alumnae connected and informed, I felt that we were reaching a point at which the alumnae should be assuming the responsibility of the Alumnae Association.”

The newly-appointed leaders have already begun meeting with faculty advisors Theresa Kiernan and Christina Bergamo to develop resources and build a leadership model that will include opportunities for more alumnae.  Plans for future events are also in the works, including a chance for alumnae to reconnect virtually with each other and current students.

“Despite the difficulties of the pandemic, we hope that the current work/learn-from-home environment and people’s increased technological adaptabilities will enable us to host multiple events over this school year that strengthen the network of Trinity Hall alumnae as well as that of the larger community,” said Nicole.

With Trinity Hall’s inaugural students now nearing their college graduations, a focus will be on helping those young alumnae network with professionals in their fields of interest.

“We are also looking forward to creating resources for alumnae to make new connections with potential employers and other professionals in their chosen field,” shared Grace. “As the Class of 2017 begins to go into the working world, these resources are very helpful and support from their friends and former teachers is indispensable.”

Thank you to Nicole and Grace for their continued and lasting contributions to the Trinity Hall community!  Alumnae, are you interested in getting involved and keeping in touch? Complete our alumnae contact update form. Stay tuned for more updates on the development of our new alumnae association.

About Nicole: Nicole is currently a senior at New York University, where she is pursuing a bachelor of science in media, culture, and communication with a minor in the business of entertainment, media, and technology. With a passion for the entertainment industry, Nicole has completed internships at renowned entertainment companies, such as Cara Lewis Group, Nasty Little Man, ID Public Relations, and ViacomCBS. This year, Nicole is researching and analyzing fan culture as part of the media, culture, and communication honors thesis program.

During her time at Trinity Hall, Nicole founded and led the Trinity Hall Tribune as editor-in-chief, and served as student director for seven of the Queen’s Court Company’s productions and chairwoman of the creative arts council. Nicole was recognized as a Graduate with Distinction and was the first recipient of the Leadership Award.

Nicole continues to maintain close ties with the Trinity Hall community. In 2018, Nicole was our first “Women in Leadership” alumna speaker, delivering a speech about professionalism and personal branding in college and the workplace. Nicole has also participated in the “Realities of College” panel for soon-to-graduate seniors and coordinated a video for the Class of 2020 from fellow alumnae.

About Grace: Grace is a senior at Loyola University Chicago where she is majoring in psychology and minoring in theatre and French. Active with Loyola’s department of fine and performing arts, Grace has served as an assistant lighting designer on a main stage production and will be moving up to associate lighting designer for another main stage production in Spring 2021. She also performed in a second stage production that explored the different psychological coping mechanisms called “In My Defense.” During her time at Loyloa she also studied abroad in Nantes, France, taking all of her courses in French to improve her fluency and receive credit towards her French minor.

A frequent visitor to campus, Grace also worked at Trinity Hall for the past two summers as an intern, assisting in secretarial duties and preparing the school for the upcoming year.