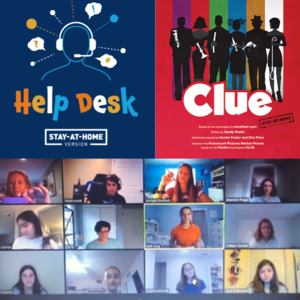 Help Desk and Clue to be performed virtually in November.

In a year of unprecedented experiences, Trinity Hall’s award-winning performing arts group, the Queen’s Court Company (QCC), is proud to announce not one but two productions for the Fall 2020 season. Strong student interest led Ellen Phillips, theatre teacher, production director and arts team leader, to provide students with two performance and crew work opportunities: Clue and Help Desk. In another first, the productions will be shared on film instead of in a traditional theater.

“This is the very first year we are putting up two separate shows in the fall,” shared Ms. Phillips. “Initially, I chose Clue, because I thought it would work in the virtual format, and I thought I wouldn’t have as many students as I normally do because we could not be live [in person in the theater].  I was right about the format, but I had more students come out for auditions than ever.”

As a result, Clue was double cast, with two actors taking turns playing each role. The large group of sophomores, juniors, and seniors rehearses daily and will perform via Zoom in November.

The murder mystery begins at a remote mansion, where six mysterious guests are gathered for a dinner party. Using a mix of live and filmed elements and presented on Zoom, an online communication platform, the actors will appear as if they are performing in the same room together. The cast and crew will set the tone and suspense of a live mystery using multiple dramatic strategies.

"It takes a bit more time to get timing down when you're speaking over video," explained Faith King '21.  "Learning how to act to a camera as opposed to acting with another person has been a new skill that I think we're all learning as we go."

“When it works, it’s quite remarkable, but it takes a lot of effort to get there,” agreed Ms. Phillips. “We are working through it and…the students are having a great time with the play.”

The varied scenes in Clue also provide opportunities for Trinity Hall’s Crowning Crew to exercise their creativity. The Crowning Crew supports the QCC’s productions, managing the sets, props, hair, makeup and costumes, and backstage and in-house organization for each of the performances. For Clue, the Crowning Crew was charged with planning out the logistics of each scene in order to make the show as realistic and personal as possible.

In her third year with the Crowning Crew, Madison Marcetti ’21 is enjoying this new challenge. “I initially became interested in joining the Crowning Crew my sophomore year, when I walked past the engineering lab and saw a few of my friends making props for the upcoming musical Into the Woods,” said Madison. “I loved the idea of seeing all the hard work and ideas of each person involved coming together to create something that everyone in the audience could enjoy.”

Even with a double cast for Clue, Ms. Phillips was also able to provide the opportunity for freshman members of the QCC to be heavily involved and play key roles in their very own fall production. An entirely-freshman cast recently began rehearsing over Zoom for Help Desk, a comedy about customer service calls that was appropriately written for a fully virtual performance.

“I got involved in the play because even when I was little I always loved the theater and when I heard how amazing the plays were at Trinity Hall I had to join,” shared Greta Senft ’24. “I actually like rehearsing on Zoom because it works with the play. Because the help desk is about the misadventures of people seeking help from a customer service company, the online aspect makes it feel all the more real.”

The arts groups are working hard towards their goal of a November showing and look forward to sharing the efforts with the larger community. The performances may be different than in the past but promise to showcase the creative talents and teamwork of all involved.

“While I am VERY disappointed that we can’t be in the theatre and on the stage, especially after the great success we had last year with Blue Stockings, I am so happy that we are all working together and keeping the arts alive,” said Ms. Phillips.  “I also believe that our students will have a unique opportunity to work as film actors as opposed to stage actors.  It’s not something we would normally do, but that’s 2020 in a nutshell.”