Seniors Trained and Commissioned to Serve as Eucharistic Ministers 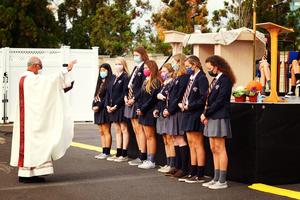 The Monarchs were installed during Mass of Remembrance on November 11.
Congratulations to the following seniors who were commissioned to be Extraordinary Ministers of Holy Communion during Trinity Hall's Mass of Remembrance on November 11: Skylar Abbey, Sarah Bilotta, Giovanna DeJohn, Isabella Giallanza, Allison Lawson, Hannah Noorigian, Cecilia Peters and Lucy Retterer. Also trained but not present for the commissioning was Madison Kelly.
Last year these Monarchs responded to a request by Sister Marianne Mahon for interested students to pursue a calling to serve as Eucharistic ministers. To begin the process the students completed an application that included a recommendation letter from their pastors. Once accepted they completed two training sessions, led by Dr. Michele McCue, Trinity Hall theology teacher and liturgical team member, who covered the theology, history and spirituality of the ministry, as well as lessons on how to perform the ministry.
"I chose to respond to the call to serve as a Eucharistic minister because faith has played such a prominent role in my life, and I wanted to grow closer to my faith by serving my community," explained Cecilia Peters '21. "Faith is one of Trinity Hall's core values, which made my calling even stronger. During the training process, I deepened my understanding of giving thanks during Mass through the Eucharist."
The new ministers will serve the Trinity Hall community at Masses scheduled during the remainder of the school year.