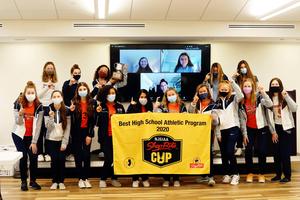 Prestigious award recognizes state tournament performance and sportsmanship.
For the second year in a row, Trinity Hall is proud to accept the coveted ShopRite Cup, which is awarded jointly by the New Jersey State Interscholastic Athletic Association (NJSIAA) and the Wakefern Corporation for state tournament performance and season-long sportsmanship. The community celebrated the achievement during a virtual pep rally on November 13.

Competing schools earn points for winning group championships and for being disqualification-free in all NJSIAA sports. At the end of the school year, the six top earning schools (four public schools and two non-publics) are awarded the prestigious ShopRite Cup. Trinity Hall earned 62 points during the 2019-2020 school year to reach first place in the Non-Public B group.

Every student athlete and coach were responsible for achieving this recognition, with the following achievements contributing to the top point total: the cross country team’s second place state tournament win; winter track’s performance in the NJSIAA Relays; and swimming’s first place state tournament win. The Monarchs were also awarded points in the fall and winter seasons for being disqualification free.

“While these are above and beyond achievements and indicators of creating a culture of excellence, there’s something that is more important than winning: your character and the reputation of your team,” remarked Alison Le Vine Pugsley, athletic director, at the virtual pep rally. “I’m so proud of who you are on the field, but I am more proud of how you conduct yourself while you are around other people and competing and respecting your competitor always. Champions are those who rise to the occasion when no one is watching.”