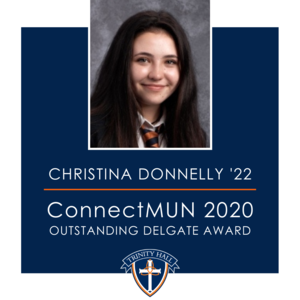 More than 40 students attended the event that saw Christina Donnelly '22 recognized as an Outstanding Delegate.
On December 5 and 6, 42 members of Trinity Hall's Model United Nations (MUN) club acted as delegates to the United Nations at ConnectMUN 2020, an all-virtual MUN conference. MUN at Trinity Hall promotes public speaking and fosters knowledge of world events. Representing Djibouti, Finland, Lithuania and Singapore, the student delegates researched, debated, negotiated and wrote resolutions on issues such as human trafficking, healthcare in conflict zones, viral weapons, education for refugee populations, countering terrorism and plastics in marine environments.
Designed to provide students with the opportunity to continue their MUN experience virtually, ConnectMUN 2020 was held entirely online through a virtual conference portal. The event included in-depth topic briefs and small committee sizes. While the Trinity Hall delegates reported that they missed traveling and interacting with students from other schools in-person, they found the online platform allowed for more order during committee sessions. All speakers' microphones were muted when not speaking, ensuring the delegates took turns participating and listening.
Trinity Hall junior Christina Donnelly was recognized as an Outstanding Delegate in the UN Permanent Forum on Indigenous Issues, representing Lithuania. She attributed her success to making a personal connection with her topic, which she researched extensively.
"I also made sure to present the information in a way unique to my own style and personality during debate," added Christina. "In the past, I have been intimidated by bolder or more outgoing delegates. In this conference, however, I used my strengths as a good researcher and a strong debater to work effectively as a delegate, while being kind and respectful to my peers."
Congratulations to all of our MUN participants, who are looking forward to continued success at future conferences this year.