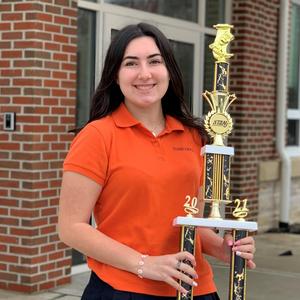 Haley submitted a portfolio detailing her work managing Trinity Hall's Fall 2020 virtual production of Clue, an experience that required adaptability and attention to detail, while offering a lesson in the value of perseverance.
Congratulations to Haley Karinja '21 who recently won the first place award for stage management in the statewide secondary school theatre festival and competition sponsored by the Speech and Theatre Association of New Jersey (STANJ), in conjunction with New Jersey’s Annual Governor's Awards in Arts Education.
For her entry in the stage management category, Haley submitted a portfolio detailing her work managing Trinity Hall's Fall 2020 virtual production of Clue. Her submission included rehearsal reports, scene breakdowns, prop checklists, film and Zoom cuts, and detailed blocking keys. The latter was essential to the success of the virtual format as each character was performing individually but still needed to look, move and pass props to fellow actors in a specific way.
"This show was unlike anything I have ever done before [because] it was completely online. It was a huge challenge," said Haley, who served as both stage manager and assistant director. "But as a stage manager, it was my responsibility to continue to adapt to whatever was thrown our way. I am really proud of the show we put together despite all the circumstances."
Trinity Hall theater teacher and Clue director Ellen Phillips was impressed by Haley's contributions and suggested she submit her work to the statewide competition.
"She really embraced the virtual format, and her role in the production was more important than ever," explained Mrs. Phillips. "She paid close attention to every detail. It really was a chance for her to shine, and I wanted to make sure we took every step possible to recognize her hard work and ingenuity."
This year’s STANJ competition was held virtually, with judging taking place over a combination of prerecorded video submissions and live Zoom sessions. Haley presented her entry to the judges during a live interview session in December and was notified of her award in January.
Haley's recent achievement is the result of several years of hard work and lessons learned from experience behind the stage at Trinity Hall productions and during internships at local theaters, such as her year-long fellowship as a Metro Scholar at the Two River Theatre in Red Bank. Her experience was enhanced by theater and directing classes she has taken since her first year at Trinity Hall.
"I became interested in stage management early in my freshman year when I began theater," shared Haley. "[When I saw older students] stage managing, I knew it was exactly what I wanted to do. I wanted to be a leader. From that point on, it was my goal to stage manage my own show one day, and that is exactly what I’m doing now."
"Stage managing has taught me so much that can be applied to any area of my life, even outside of theater," she continued. "After many shows, I have learned that the key to my success has been my adaptability and perseverance. Stage managing can be unpredictable. One minute everything can be going perfectly, and the next the show is collapsing around me. But that’s what I love about it. These obstacles have given me opportunities for personal growth. I have learned to accept my mistakes and view them as a part of the journey. I have also gained a sense of confidence and leadership that would otherwise not have been possible."