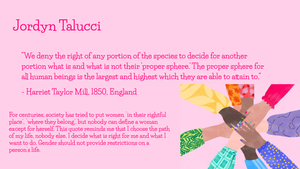 Monarchs' recognition of International Women's Day continues with a historical perspective.
Ninth graders in Mrs. Gillen's world history class recently studied gender stereotypes for an assignment timed for International Women's Day (IWD). Students chose a quote from a famous historical figure that reflected either a past stereotype or stigma attached to women, or a positive change. As part of IWD's #ChooseToChallenge initiative, the ninth graders then made relevant connections to these gender biases by relating them to their own lives.
Following are a few examples of quotes chosen by the students and their reactions:
Jordyn Talucci:
Sophie Ramos:
Grayson Turkaly:
Published March 16, 2021