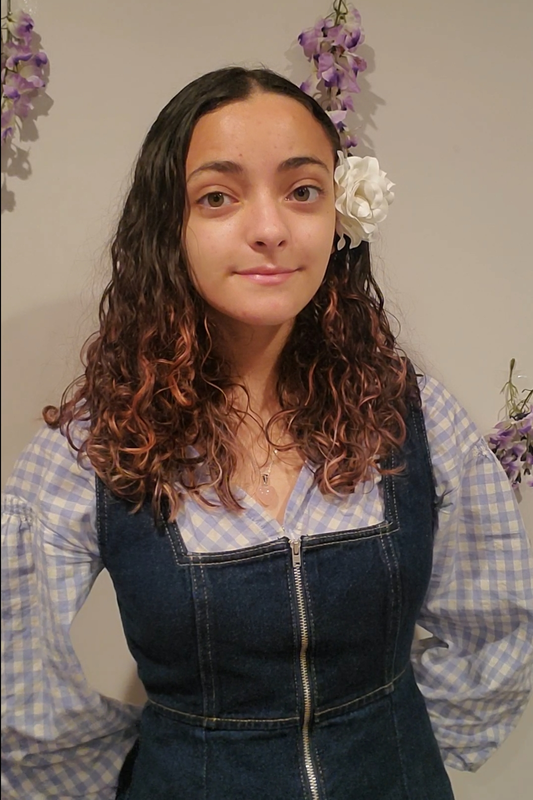 Dianna Whaley '21 will play Juliet in the virtual show, available online from May 17 through June 30.
Dianna "Gracie" Whaley '21 recently landed her "dream role" of Juliet in Two River Theater's Tiny Shakes production of "Romeo and Juliet."
Tiny Shakes, Two River Theater's new educational program, gives students the opportunity to perform and support the production behind the scenes, and work with a professional design team. According to Tiny Shakes, "This year, the program takes the limitations of 2021 as an opportunity for students to delve deeply into Shakespeare’s star-crossed romantic tragedy, giving them the agency to tell the story of each scene in their own way and film it." The students' videos were then edited into a theatrical collage and posted on Two River Theater's website for audiences to enjoy and for teachers to use as a resource.
"When filming a show in a pandemic, you take on the responsibility of an actress, a videographer, and the director all at once," explained Dianna. "It definitely required a lot of time and patience, but I can say I am ultimately very happy with how the show came out."
The experience also deepened Dianna's appreciation for Shakespeare, and she doesn't want fellow actors and audiences to be intimidated by his style.
"Sometimes there's some hesitation surrounding Shakespeare because of the language," said Dianna. "A fair amount of people who worked with me had never done a Shakespeare show before but were surprised at how much they understood the language."
"Romeo and Juliet" is the 16th show in which Dianna has participated on and off stage during her high school career. At Trinity Hall she serves as the Arts Council Chair and performs with the Queen's Court Company. Her theatrical experience has also included productions with CBA's Pegasus Production Company among other production companies and community theater groups. This fall, she plans to double major in forensic science and biology at Syracuse University, and hopes to continue acting in her free time.
Dianna joins a group of several Trinity Hall students who have have benefited from the educational programs offered by Two River Theater over the past few years, including the Metro Scholars internship program for high school juniors. The Tiny Shakes' production of "Romeo and Juliet" will be available on Two River Theater's website from May 17 through June 30. Tickets are free with registration required to receive a link and password to access the performance. Visit https://tworivertheater.org/tiny-shakes/ for more information.