“Sister Act” Live on the Outdoor Theater May 20-22 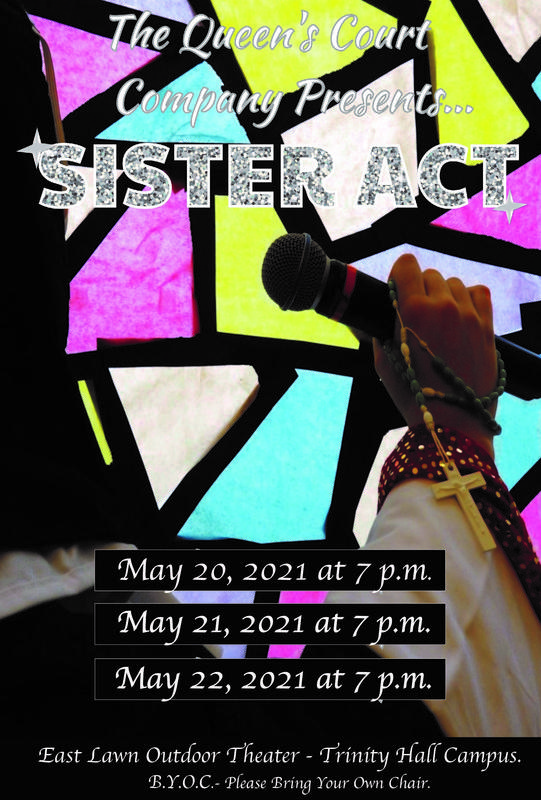 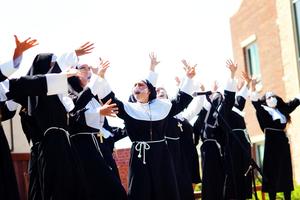 Performances will be held May 20, 21, and 22 at 7 p.m. at the East Lawn Outdoor Theater at Trinity Hall.
It’s opening night! The Queen’s Court Company (QCC) will premiere its long-awaited performance of “Sister Act” at 7 p.m. on the East Lawn Outdoor Theater at Trinity Hall, with additional shows on Friday and Saturday evenings. The “divine musical comedy” is based on the hit 1992 film of the same name and celebrates the spirit of sisterhood, which the cast and crew embodied throughout the production’s long journey to the stage.
Members of the QCC were originally scheduled to perform “Sister Act” in March 2020. The cast was just days from opening night when the show was canceled during the early weeks of the COVID-19 pandemic. One year later, arts team leader and director Ellen Phillips and the company were determined to see the production through. While new students have joined the cast, several original cast members have been able to reprise their roles.
Junior Amanda Philipson was excited to return to the role of Deloris Van Cartier. “’Sister Act’ is one of the most complex and intricate shows I have done vocally, so when I found out that all of our hard work and time would finally be displayed, I was thrilled,” she said. “Our cast has been so strong and flexible this year and I could not be prouder of how we have come together.”
Jumping back into a play that was performance-ready one year ago provided both advantages and challenges. Mrs. Phillips has enjoyed the opportunity to make refinements and the added time to rehearse the finale, which can get less attention over the course of a rehearsal period. The Crowning Crew has also been able to add new touches to costumes. However, additional time and attention has been devoted to designing and building new sets and handling the effects of wind on sound quality during outdoor rehearsals.
“Sometimes we had a lot of wind, construction, and birds singing along with us, but as the weather got nicer, it was a really fun experience,” said Amanda.
Remote rehearsals over Zoom have helped to supplement, but have also presented timing and sound challenges. Under these conditions, it has been even more important for the actors and instrumentalists, led by music teacher Andrew Bodgan, to assume personal responsibility for practicing their parts at home.
“The students are very dedicated to seeing it through,” said Mrs. Phillips. “They are the true example of leadership, respect, perseverance, and faith. They’ve all been tested through this experience and are rising to the occasion.”
“This show is perfectly timed because we have depended on each other," added Amanda. "As the show says, our sisterhood is so important because we are part of ‘one terrific sister act.’”
The QCC’s performances of “Sister Act” will be held at 7 p.m. on Thursday, May 20; Friday, May 21; and Saturday, May 22. Please bring your own chair to enjoy the show under the stars on the East Lawn Outdoor Theater. Tickets for the performance are free, but donations to support the production of the show are appreciated.
Published May 18, 2021