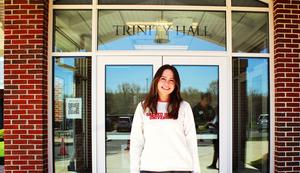 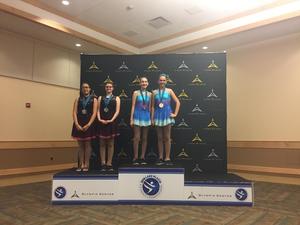 The award represents Bridget Incantalupo’s dedication and commitment to her figure skating career.
The U.S. Figure Skating Graduating Seniors Award recognizes the hard work of student-athletes who have participated in figure skating throughout high school. Bridget Incantalupo ‘22 has been awarded the Silver level Graduating Seniors Award for her accomplishment in Solo Ice Dance. This award recognizes Bridget’s continued commitment to succeeding in both athletics and academics.
Bridget explained how she began figure skating: “I started figure skating when I was around five years old. The first time I went to an open skate with my mother, I didn't know how to stand on my own two feet, so I would hold onto her. Because her arm muscles ached for the next week, she made me take skating lessons the following month. I'm glad she did because I've loved skating ever since.”
During her freshman year of high school, Bridget competed on a synchronized figure skating team called the Icelantics that placed fifth overall at the Eastern Sectional Championships. During the same year, she competed with a friend in a synchronized figure skating team and placed eighth in the country at nationals. After her freshman year, Bridget focused more on solo ice dance and mastering pattern ice dances. Now as a senior, Bridget is skating at the Olympic Level as a Gold Level ice dancer based on ice dance tests.
Bridget also currently serves on the Junior Board of the Jersey Coast Figure Skating Club as their Social Media Chair. As the Social Media Chair, Bridget promotes fundraising and community events on their social media platforms.
Bridget expressed, “The Silver US Figure Skating Graduating Senior Award is a big accomplishment after all my hard work and all my years of skating experience.” Congratulations, Bridget!