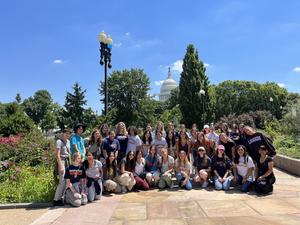 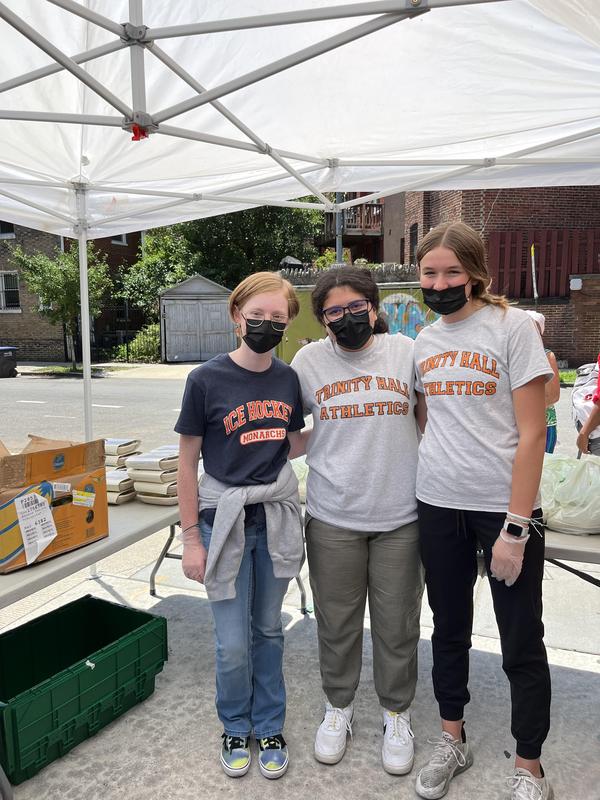 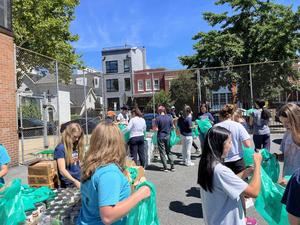 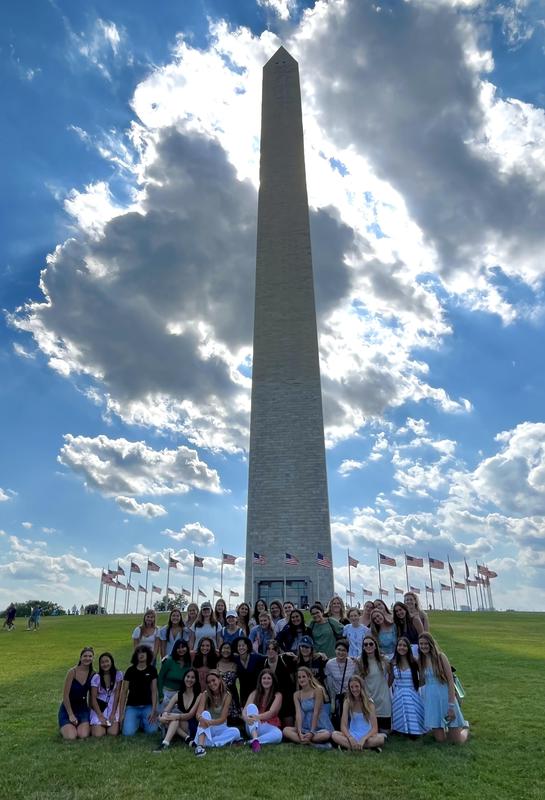 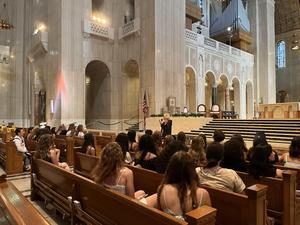 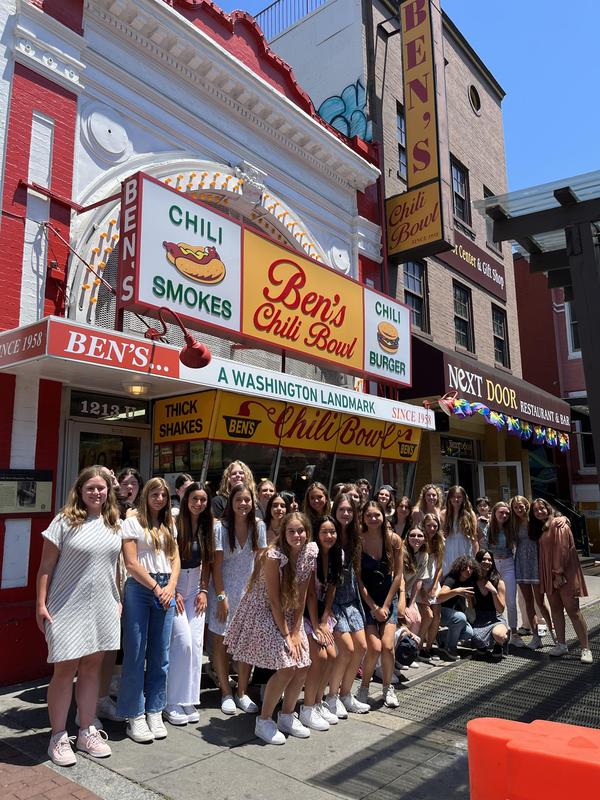 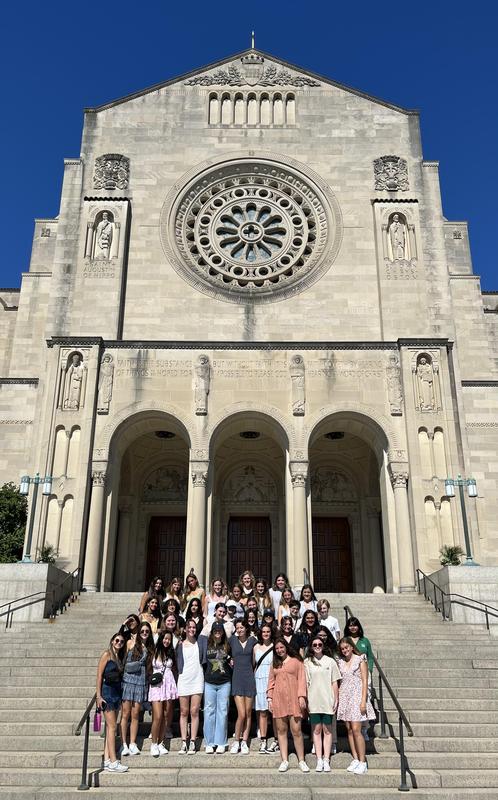 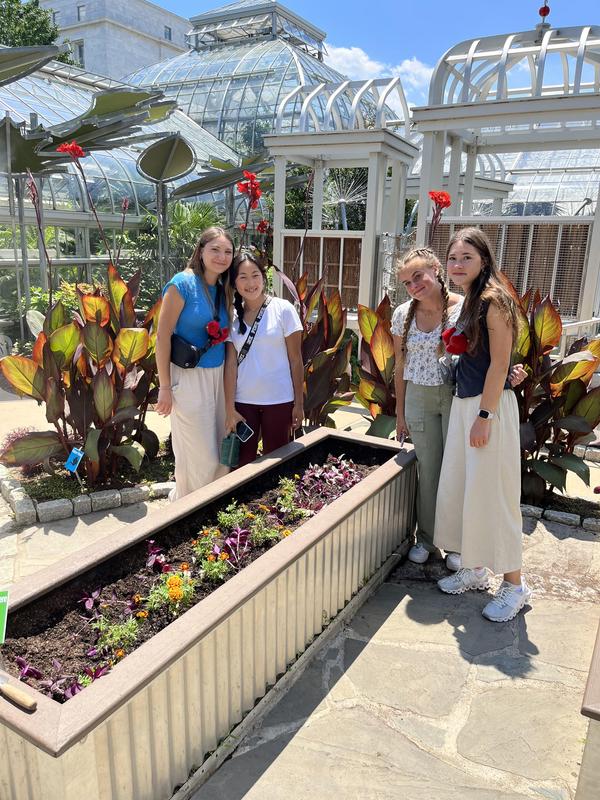 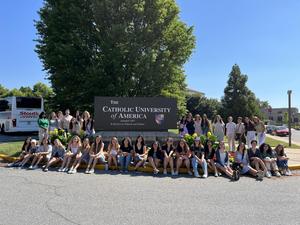 Hear from Trinity Hall students about their experiences in our nation's capital...

On early Tuesday morning, a group of 45 students and six chaperones left Trinity Hall at approximately 5:30 a.m. en route to Washington D.C. for a service and exploration trip in the city. At 9:30 a.m., the group arrived in northwest DC and split up into three groups for a full day of service. The three service organizations were We Are Family, Martha’s Table, and So Others May Eat (SOME).

We arrived at “We Are Family” around a quarter to 10. When we first got there, it was hot, and we were in a random parking lot, having no clue what was in store for us! Tulin, the co-director of the organization briefly told us some stories about the people they serve, most of them being African American senior citizens. Many of them had to endure hardships and challenges especially living in lower income homes in DC. Tulin said unfortunately providing food for themselves is not always the first priority due to other expenses.
Later on, her husband Mark told us a story about the history of DC and the hardships and challenges African Americans faced. He also preached scripture and explained how our service strengthens our relationship with God! Our work putting together bags of groceries, organizing, and loading trucks with food was without a doubt hard work, but knowing that we fed 500+ seniors and helped an organization like this, we felt fulfilled and whole!

I was a part of the group of eight that went to Martha’s Table, where their mission is to serve people who unfortunately aren’t able to retrieve meals every day. We were able to give out sandwiches, produce, and fruit to families with children, the elderly, and people hustling to or from work. When we got there, we were split into two groups of four and four. One group helped prepare meals in the kitchen and the other group gave out food to people. The two groups would then switch duties.
It was important that everyone got to help out preparing and distributing the meals because it gave a better appreciation for what was being done and the significance of why and how helping others is truly a blessing. To be able to communicate and present ourselves to people who appreciate the work of Martha’s Table and help them out was a priceless experience. We had the opportunity to provide to a community of genuine people with human needs, serving them over 260 dinners and over 600 bags of groceries.

The second day of the trip was spent traveling around DC and touring iconic landmarks and museums. First, the group headed off to the Basilica of the National Shrine of the Immaculate Conception at Catholic University and Saint John Paul II National Shrine, followed by lunch at the famous Ben’s Chili Bowl. The group then went to the Holocaust Museum and ended the night with an illuminated monuments tour.

Day two definitely was the most filled out of our adventures in DC. Along with it being the most filled literally, it also was filled with lessons for me. When entering the Basilica, I was starstruck by the beauty of it. I'm not usually someone who pays attention to the art and architecture of buildings but being there, I was immersed in it. It was honestly breathtaking. When we went to Ben Chili's Bowl for lunch, we heard an inspirational speech. The phrase "tomorrow isn't promised" will always repeat in my head reminding me to be my best self. When we went to the Holocaust Museum, I was shocked by the horrors I was learning about and the true agony of what happened. When we were touring the memorials, I was reminded of how lucky I am to attend Trinity because of our amazing teachers/staff. Ms. Post walked me to the bathroom, and I really appreciated that.

On Day 2 of Washington D.C., the highlight of the day was eating at Ben’s Chili Bowl. My classmates and I didn’t expect much eating there and certainly didn’t expect a life lesson. Mr. Keith gave us a passionate speech, one that would be engraved in our minds for a long time. He had just met us and he already believed in all of us. He told us we would do great things in life and to live every day as if it was going to be our last. It was a very moving speech!

On Wednesday, we started our day by touring the Basilica of the Shrine of the Immaculate Conception. There, we learned about the deeper meanings behind the architectural designs. We then traveled to the Shine of Pope John Paul II where we learned about his life and journey to sainthood. We then stopped for lunch at Ben’s Chili Bowl where we were spoken to by one of the team members there who was very eager and happy to share the restaurant's history. After, we went to the Holocaust Museum where we journeyed through a series of floors and learned the heartbreaking history of the Holocaust and how it affected the world. We ate dinner at the Hard Rock Cafe and then walked through the National Mall stopping at the Vietnam War Memorial and the Lincoln Memorial.
On Wednesday, I learned more about the culture and history of DC. I had previously known that it was and still is a central area for many civil rights movements, but after hearing more about personal stories, I was able to better understand the city’s culture and energy. I was also able to discover the importance of religion and hope for many groups of people and it can affect them if that hope is taken away.
I had a really good time exploring DC and learning more about the world I live in on Wednesday.

The last day of the trip consisted of an educational exploration around the Smithsonian Museums. Students had the opportunity to visit the Museum of Natural History, the American History Museum, and the National Gallery of Art. Before heading back to New Jersey, the group made one last stop at the United States Botanic Gardens, a perfect way to wind down from the past two days.

Our third day of the adventure of the DC trip started with an early morning at 7 a.m. Everyone gathered their belongings and went to the dining hall for a final breakfast together. Then, we made our way on the bus and took in our surroundings one last time before leaving the Catholic University campus. The bus took us to the middle of the DC area, and we all swarmed off the bus as we decided which of the Smithsonian museums we’d like to visit.
The Museum of Natural History taught us about the more simple lifestyle and beauty the wilderness had to offer. The Museum of American History reminded us of our privilege of freedom and liberty while also showing us interesting pop-culture items that we might’ve taken for granted. After spending our afternoon at the Smithsonian museums, our chaperones brought us to the Botanical Gardens. The many different types of plants made us ponder how much more diversity there could be in our land. After summing up our trip with the history of our country, we promptly made our way back to the bus and bid DC a final goodbye!
Published July 7, 2022 Print