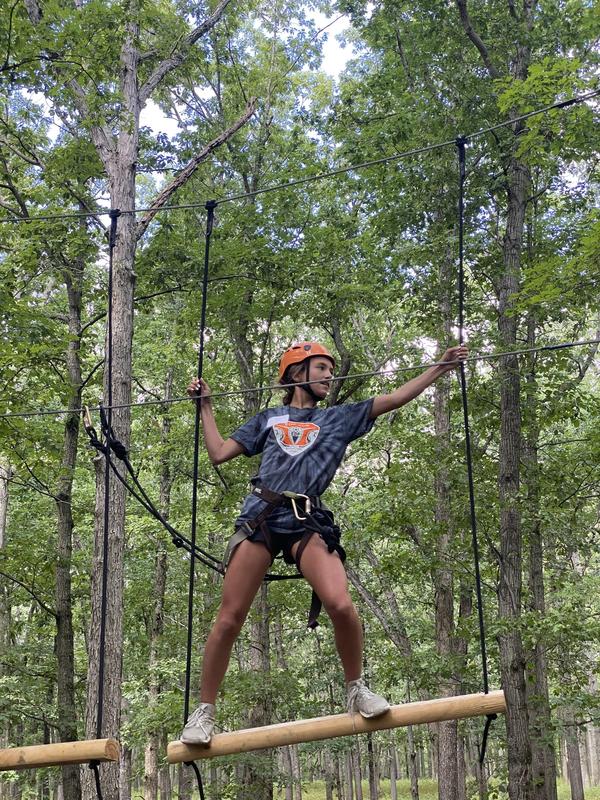 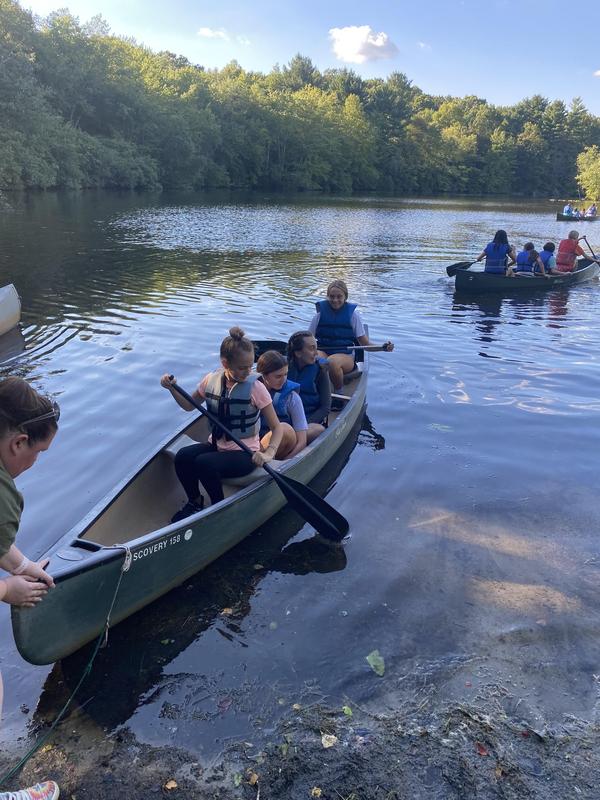 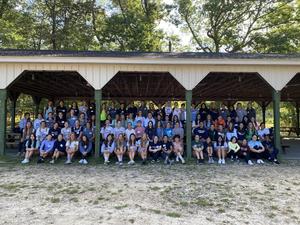 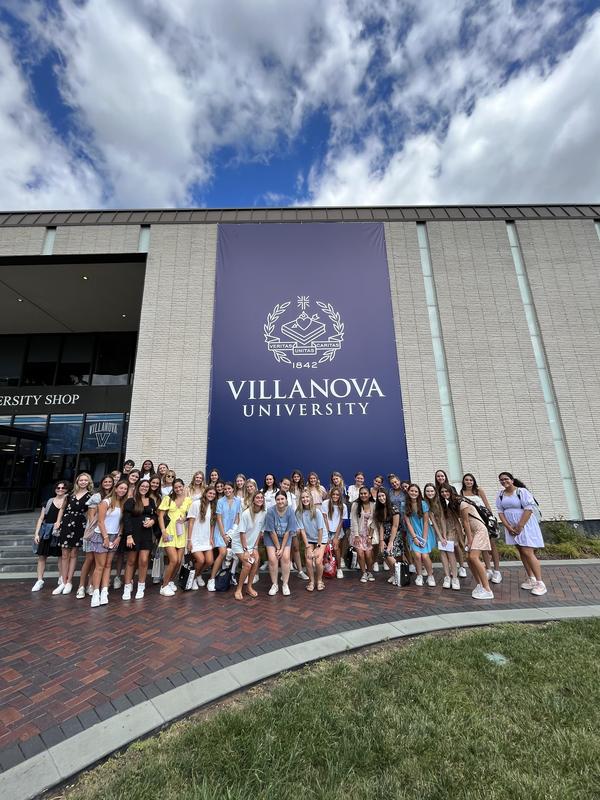 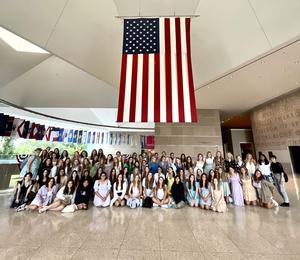 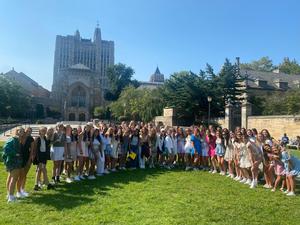 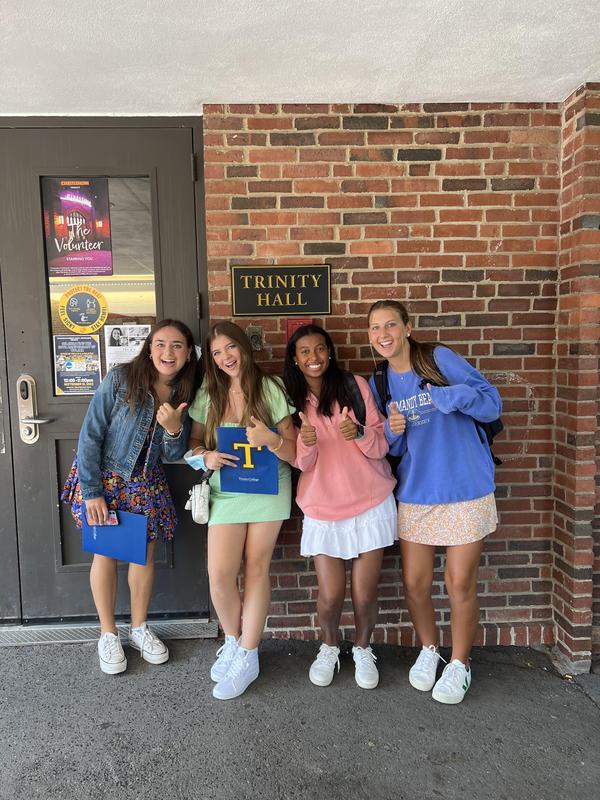 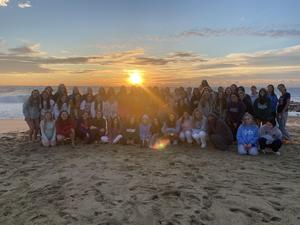 Going on a camping trip during the first week of school is one of the longest-standing traditions at Trinity Hall. Last week, the Class of 2026 participated in this tradition at Camp Sacagawea. Early on Thursday morning, the freshman class boarded buses heading to Farmingdale for a day full of outdoor activities and bonding with their fellow classmates. Kayaking, ropes courses, ziplining, rock-climbing and archery were among the activities the freshmen completed through exploration, risk-taking and teamwork. As an extension to freshman orientation, this camping trip allows our freshmen to get to know each other before the school year and academic classes officially begin. Before returning home, the camping day ended with the Class of 2026 sitting around the campfire and roasting marshmallows together to make s’mores.
After spending the day at Camp Sacagawea, the Class of 2026 returned to campus on Friday with the Class of 2025. The freshman and sophomore classes started the day with an ice breaker activity, introduced by sophomore class president Emily Rae. Then, Mr. Kabash provided a walkthrough of the technology used in Trinity Hall classrooms for the freshmen. This walkthrough allowed the Class of 2026 to get acclimated to using their computers for class and submitting homework. The day ended with the Class of 2026’s first introduction to the Royal Rumble. Going head to head with the Class of 2025 – members of Team Orange – the freshmen competed in a balloon toss and a relay race. The Class of 2026 took home first place in both events and won their first points for Team Blue!

For the sophomore trip, the Class of 2025 traveled to Pennsylvania, where they were scheduled to visit two college campuses as their first introduction to the college process. When the buses didn’t show up to take the girls to their first stop – St. Joseph’s University in Philadelphia – the girls kept their spirits up with games and fun on campus. Undeterred, they boarded their buses a little bit later than scheduled and had a wonderful visit at Villanova University in Villanova, PA for a tour, where they met up with Trinity Hall alumnae Colleen ‘19, Grace ‘19, Hope ‘20, Shannon ‘20, Catherine ‘22, Kathleen ‘22 and Sarah ‘22. They ended their day by visiting the Constitution Center in Philadelphia’s Center City. The trip gave the sophomore class a glimpse into life at college and allowed them to explore the country’s history in a major historic city.
The sophomores returned to campus on Friday and spent the day with the freshman class. While participating in activities alongside the freshmen, the sophomores offered their help and expertise as second-year students.

The Class of 2024 headed to New York and Connecticut for the annual Junior College Trip. This trip was jam-packed as the junior class visited six colleges in two days! The College Counseling Office planned this trip to give juniors exposure to colleges of different sizes and styles, with different programs and in different areas. The bus first headed to Marist College in Poughkeepsie, NY for an information session and tour, where the group saw Trinity Hall alumnae, Fatima '20 and Meghan '22. After their tour and lunch at a local cafe, the junior class and chaperones headed to their next destination just a few minutes down the road: Vassar College, also in Poughkeepsie. After the day of exploring their first two campuses, the group headed to Nomad’s Adventure Quest. There, students relaxed, ate dinner and had fun playing laser tag, playing arcade games, riding go-karts and more.
On Friday, the group woke up bright and early, ready to visit four college campuses. They started at the University of Connecticut in Storrs, CT for a campus tour, followed by Trinity College in Hartford, CT. Their next stop was at Yale University in New Haven, CT, where the group ran into Trinity Hall alumna Dayra ‘22. Their last stop was at Fairfield University in Fairfield, CT, where the group saw more Trinity Hall alumnae, Ciara ‘22 and Grace '20. This trip allowed the junior class to see a variety of colleges similar to others around the country and gain a better understanding of campus and college life to inform their upcoming college application process.

The seniors started the year off with a Senior Retreat. Beginning with the Senior Sunrise, the Class of 2023 gathered on Sea Bright beach to watch the beautiful sunrise together. After a moment of peacefulness on the beach, they then traveled together to St. John Paul II Retreat Center in Kearny, New Jersey for an overnight retreat. Having already assumed their role as the leaders of the student body, the retreat offered the senior class a private moment focused on the journey ahead for senior year, self reflection and connecting as a class through faith and prayer. After the two-day retreat, the seniors are prepared for the year ahead, and are ready to be leaders and role models for the student body!
Published September 12, 2022 Print