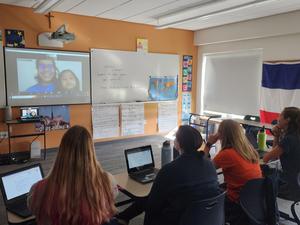 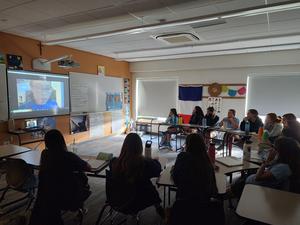 Ketakandriana Rafitoson visited our French classes via Zoom.
In early November, students in Madame Lehman’s French IV and AP French welcomed Ketakandriana Rafitoson (Ke), from Madagascar, into their classroom via Zoom. She is a Malagasy political scientist, researcher, activist and human rights defender who is currently leading the national chapter of Transparency International in Madagascar.
Ke talked to the Trinity Hall community in 2017 for International Day of the Girl. This year, she was invited back to the French classes to discuss various topics such as traditions, languages and politics in Madagascar. Conversing with and learning from native French speakers from different countries allows our students to gain global perspectives in the classroom while making improvements in their target language proficiency.
Here are testimonials from the students:
"Ke's visit to my AP French class was very eye-opening to the disparities that exist in the modern world. Ke inspired all of us with her dedication to the common good of her native country of Madagascar in the face of systemic corruption and chronic underdevelopment. I hope that I can raise my voice with Ke's eloquence and carry myself with Ke's grace in order to improve the world around me." -Ally L. '23
"It was so interesting to hear about Ke's experiences politically and culturally through the lens of a foreign country. She is an amazing and talented individual with so many different skills, and is equally inspiring through her role in the government in Madagascar and her role as a mother of four. The things she shared with us shed light on national/global issues and how they affected Madagascar which was very interesting to see. Overall, it was an awesome experience." -Scarlett B. '23
"The discussion with Ketakandriana Rafitoson (Ke) taught us about Madagascar and its vibrant culture from a Malagasy perspective. As executive director of Transparency International Madagascar, Ke was also able to enlighten us on Madagascar's politics and rampant corruption. The interview educated us on Ke and her work while broadening our global knowledge." -Katie E. '23
Published November 22, 2022