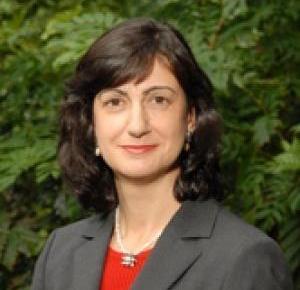 “There are no short cuts. I’ve had to work hard and be prepared. You don’t want to just ‘wing it’ in your life.”

On Friday, March 14, 2014, Trinity Hall welcomed Dr. Marta Tellado, vice president for global communications at the Ford Foundation, as the fifth speaker in our “Women in Leadership” series.

Marta Tellado is vice president for global communications at the Ford Foundation where she oversees communications, government relations and public affairs. As part of the foundation’s executive leadership team, Marta works on strategic planning and global brand management, and partners with program teams to advance the foundation’s grant-making strategies and priorities.

Prior to her appointment, Marta held several senior-level posts in Washington D.C., working with policymakers, nonprofits and think tanks on public policy, organizational management and strategic communications. As vice president of communications at the Partnership for Public Service, she led an award-winning research, branding and outreach team that raised awareness and improved public perceptions of government and government service. Before joining the partnership, she was director of Domestic Policy Programs at the Center for National Policy.

A veteran of Capitol Hill, Marta served as director of National Issues and Outreach to former U.S. Senator Bill Bradley. She led the senator’s national outreach strategy on a broad set of legislative policies and served as a senior adviser on social policy during his presidential campaign.

At the Aspen Institute, Marta founded and directed the first bi-partisan domestic public policy forum. The groundbreaking effort brought together leaders from business, government and academia to explore and find innovative solutions to contentious domestic policy.

Marta serves on the boards of the Council on Foundations, Philanthropy New York Public Policy Advisory Committee, Ballet Hispanico, The Washington Center for Internships and Academic Seminars, The Wroxton College Advisory Committee, Fairleigh Dickinson University, and the Advisory Board of the Institute for Global Economic Development. Previously, she has served on the board of Hispanics in Philanthropy, the Latino International Theater Festival of New York,  and The Advertising Council Advisory Board on Public Issues.

Marta holds a Ph.D. in political science from Yale University where she was a Newhouse Teaching Fellow, and a bachelor’s degree from Fairleigh Dickinson University.