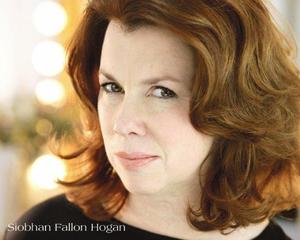 “It’s hard to say ‘No’ and develop your moral fiber. That’s why your school is so important.”

On Monday, April 28, 2014, Trinity Hall welcomed actress Siobhan Fallon Hogan as the seventh speaker in our “Women in Leadership” series.

Siobhan Fallon Hogan has been seen in several blockbusters over the past 20 years, such as “Forrest Gump” (1994), “Men in Black” (1997) and “Baby Mama” (2008). She is currently playing Arlene Moran, Matt Dillon’s secretary in FX’s Wayward Pines by Chad Hodge and Blake Crouch. The redheaded character actress has had many memorable roles in both film and television.

Siobhan is the daughter of attorney William J. Fallon and Jane Fallon of Syracuse, New York. She was born in 1961 and is the second of five children. A graduate of Le Moyne College in Syracuse, New York, she received her M.F.A. from Catholic University. She began her career on stage in her own character-driven, one-woman shows. After appearing in her show, “Bat Girl,” she was cast on Saturday Night Live in 1992. SNL opened many doors for Siobhan, and she then began to work steadily in film.

Although she began in comedy, Siobhan has a following in dramatic foreign films, notably Lars von Trier’s “Dancer in the Dark” (2000) and “Dogville” (2003). She was also seen in Michael Haneke’s “Funny Games” (2007). Her television credits include a recurring role on Seinfeld (1989) as Elaine’s (Julia Louis-Dreyfus) roommate, Jack Donaghy’s (Alec Baldwin) sister on 30 Rock (2006) and several other guest spots.

She has been happily married to commodities trader Peter Hogan for 21 years. They have three children: Bernadette, Peter and Sinead.

Before leading our students in a fun improvisational exercise, Siobhan spoke to them about the importance of respecting yourself and others, maintaining your standards, and how your actions reflect your beliefs.