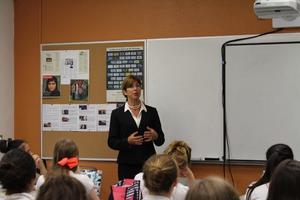 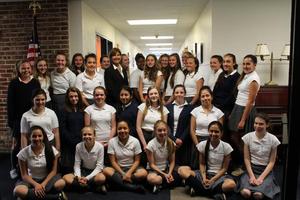 On Wednesday, May 28, 2014, Trinity Hall welcomed Senator Jennifer Beck as the eighth speaker in our “Women in Leadership” series.

Senator Beck was born and raised in Erie, PA. She attended Boston College, where she majored in physics and mathematics. She was a walk-on for the BC track team where she was named co-captain her senior year. She then got her masters in government administration from the Fels Institute of Government at the University of Pennsylvania.

She started her career as chief of staff for Assemblyman Joe Azzolina before leaving for the private sector, where she ran the Trenton office of MWW, New Jersey’s largest public affairs firm. Before serving in the Senate, Jennifer served one term as an Assemblywoman. She also served two terms on the Red Bank Borough council.

Jennifer has received accolades from multiple organizations during her political career, including the Barbara Boggs Sigmund Award, an honoree for the Forty Who Make a Difference and the Millicent Fenwick Award for Public Service. In 2008, the Senator was also honored when she was one of 24 elected public officials across the country selected to receive the Aspen Institute’s Rodel Fellowships in Public Leadership.

Senator Beck is president of JAB Marketing, a media relations and marketing firm. She also is a trustee with the Monmouth Conservation Foundation, a member of the Red Bank Womens Club and formerly was a rape crisis counselor at what is now 180/Turning Lives Around.

She is an avid runner and participates in road races and triathlons all over the United States.