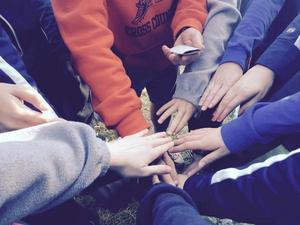 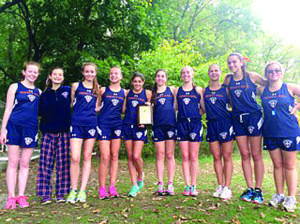 The following article appeared in the Two River Times, October 31, 2014.

In what came as a surprise to many fans and experts, Trinity Hall won the freshman girls cross-country championship, finishing ahead of Middletown South and Red Bank Catholic, which finished second and third overall, respectively.

Trinity Hall, an all-girl’s school which only opened its doors in Middletown in September 2013, is making its name known throughout the running community this season. With only 10 girls currently running on the freshman cross-country team, head coach Tony Avallone has made them into believers.

“Depth is what won this race for us,” Avallone said. “This group of girls work tirelessly every day and are strong independent woman.”

This year, Trinity Hall has finished second at the Roxbury Invitational, third at the Stewart Memorial and first in the “B” race at the freshman Shore Coaches Adidas Invitational.

In the coming weeks, Trinity Hall will be back in action competing at the Catholic Track Conference Cross Country Championships, the Non-Public Group B State Cross Country Meet, and, possibly, the Meet of Champions back at Holmdel Park.

“The support our girls get from the administration, especially from Ken Santos, athletic director, and Mary Sciarrillo, head of school, is tremendous,” Avallone added.  “Winning the Monmouth County championships is the biggest win for us to date, but it won’t be the last.”