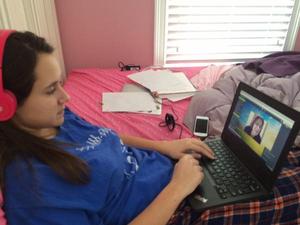 Trinity Hall was featured in the Asbury Park Press.

You can read this article online here.

Trinity Hall: No snow days thanks to tech

MIDDLETOWN – Snow may have brought a day off for tens of thousands of students in Monmouth and Ocean counties on Tuesday, but learning continued for girls who attend Trinity Hall.

Students who attend the all-girls private high school in the Leonardo section spent the day not sledding or shoveling snow, but typing away on their laptops. The nearly 80 students continued their school day from home, with a web conference with teachers at 10 a.m. followed by hours conferring with classmates and instructors online and typing assignments.

“It’s preparing high school students for what is reality in the workplace today,” said Bill Castellano, 49, of Middletown, whose daughter is a sophomore at Trinity Hall.

Both worked from home on their computers Tuesday, he said.

Whether doing math problems, learning chemistry, studying engineering, or reading history, class carried on for the Trinity Hall girls. Google chats enabled them to talk through assignments. They watched instruction over YouTube, and emailed questions to teachers.

“That’s exactly what we want them to be doing, is working from home,” said Mary Mahon Sciarrillo, head of Trinity Hall. “We do a lot of blended learning as a matter of practice.”

Private schools are leading the way in virtual learning during snow days. In contrast, public schools are still constrained by old rules that require students to be in the physical presence of a teacher to get credit toward their 180-school day per year mandate.

Trinity Hall students have school-issued Chromebooks, and through technology keep learning and interacting with classmates and teachers regardless of location. A student stuck in Costa Rica because of the storm was able to participate in classwork because she had an online connection, Sciarrillo said.

“It tells them and teaches them that education… is important. It doesn’t just stop because of the weather,” she said. “With the access they have with technology, it’s really easy to continue to work.”

Lorraine Knepple, 47, of Point Pleasant said her 14-year-old daughter Emily, a freshman at Trinity Hall, was able to complete her school assignments and still get outside to enjoy the snow. Emily did not complain about doing the school work when other students in her neighborhood were sleeping in or enjoying their day off, Knepple said.

“I think it just reinforces the commitment these girls have made to a higher learning experience,” she said. “I think it’s the way things are moving. I think Trinity Hall is out in the forefront of it.”