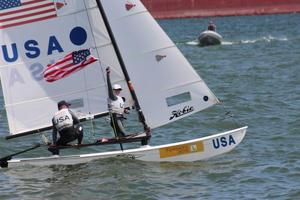 Toronto, Canada – Grace Modderman, a junior at Trinity Hall in Leonardo, NJ, took home a silver medal at the 2015 Pan American Games. Grace, from Rumson, and her father, Mark Modderman, from Long Branch, competed as a sailing team for Team USA in the Hobie 16 class and maintained their second-place standing during the final race on July 19 to secure their place on the podium. The Pan Am Games is an international multi-sport event held every four years that follows the organization and eligibility rules of the Olympic Games.

For pictures and full coverage of the Moddermans’ experience at the 2015 Pan Am Games, go to:

“I have been sailing competitively with my dad for the past two seasons, but I have been on and around boats my entire life. It is definitely a family tradition on my dad’s side. Growing up in South Africa, he began sailing at 14 and as he learned so did the rest of his family. Soon the whole family was involved in the racing community. His dad and mom would help run races and coordinate boats, while my father would sail with his sisters. Sailing is truly a family sport in this aspect because everyone can be involved and experience the joy of sailing together.”

The road to the Pan Am Games:

“We became eligible to compete in the PanAm Games first by being American citizens. I am a citizen and my father, who is from South Africa, received his citizenship in the early fall of 2014. Then we competed in the 2014 North American Championships where the top three countries were qualified to be in the Games because there would only be seven countries allotted for the Hobie 16. Unlike the rest of the countries who had an event to qualify their country and then a separate event to qualify the individual team, the United States had the North American Championships count as both of these things. So my dad and I placed second in the North Americans and this qualified our country and us as a team to be a Hobie 16 competitor in Toronto.”

Sailing with her father:

“It was really an incredible experience to be sailing with my dad at such a large event, and to just sail with him in general. Sailing with someone, especially in a two-person boat, helps you to develop a bond that not many people can experience. You really learn to work together and understand each other’s needs without saying many words. The key to sailing well with someone is having good chemistry and having respect for one another. My dad and I have always been close and have become closer due to sailing, but I think this experience really brought us even closer than before and made the trip so much more enjoyable. I really love sailing with my dad and getting to spend that one-on-one time with him. Also, we were the only father daughter team at the event besides one father-daughter-friend trio. Everyone was constantly telling us how jealous they were of us being able to do this together and how special they thought it was.”

What it was like to compete at an international event:

“One of my favorite parts about competing in Toronto was the Olympic feel it gave you and how it really made you realize you were part of something bigger. During the opening ceremonies when we walked in and we all had our matching Team USA track suits on, with the whole crowd screaming and cheering for us, it was just like – Wow, these people are waving for me? I couldn’t even believe it, it was truly incredible. Also meeting all the athletes was amazing. So many of them were people I have watched on TV or idolized – and there they were next to me in the elevator or having a casual conversation with me while we waited in line for food. It was staggering in the village to see so many countries and so many athletes from so many different sports. I’m still in awe over the whole experience. The opportunity to be there and to be part of something so much bigger as a member of Team USA was astounding.”