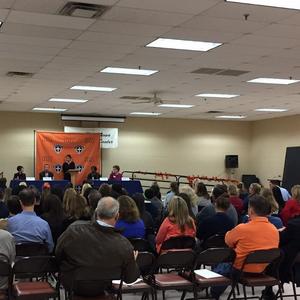 On Tuesday, October 27, we welcomed admission representatives from Loyola, Princeton, Rutgers and Villanova for our first-ever College Night.

On Tuesday, October 27, Trinity Hall hosted its first-ever College Night. It was held in the Middletown Senior Center on the Croydon Hall campus in order to accommodate the large number of attendees. Every 11th grade student attended the event along with a parent, and underclass parents attended as well. Moderated by Christina Bergamo, Trinity Hall’s college counselor, the panel of speakers included Tania Casteneda from Rutgers University, Michael Gaynor from Villanova University, Elena Hicks from Loyola University Maryland, and Terri Riendeau from Princeton University. All of the panelists agreed that new schools are not unusual during the college admissions process, and certainly not detrimental to the student applicant. The panelists also spoke on a variety of topics including the new SAT, advice for recruited athletes, and several other college admission concerns.