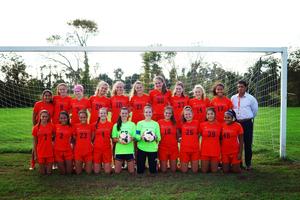 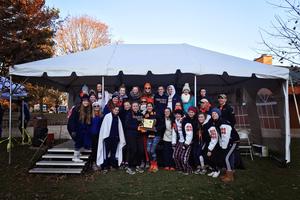 Two of Trinity Hall's fall athletics teams end season at historic heights.
Tinton Falls, NJ – Trinity Hall, an independent, all-girls high school that opened in Fall 2013, ended the fall athletics season with two prominent postseason appearances. On Thursday, November 8, 2018, the varsity soccer team played in the NJSIAA Non-Public B South championship game, losing to Saint Rose with a score of 1-0. On Saturday, November 10, the cross country team won the NJSIAA Non-Public B Groups State Championship for the first time in program history.
“Soccer had a great run in the postseason,” said Ken Santos, Trinity Hall athletic director and head coach of the varsity soccer team. “The girls came together at the right time and played their best soccer at the end, allowing us to win three state tournament games and reach the south final. It was a great experience for us as a young team, and we will build on that success in the future.”
“I’m so proud of each and every one of these girls,” said Adrianna Tacopino, assistant coach of the varsity soccer team. “It was a great end of the season, and I was honored to have been part of their ‘Cinderella’ run.”
“Our girls are challenged in the classroom, and work hard academically. They carry that same work effort to practice every day,” said Tony Avallone, head coach of the cross country team. “The Non-Public B Championship is a testament to their commitment that when you work hard good things happen.”
“Our athletics program is growing and becoming more competitive all around,” added Santos. “Coach Avallone has built a great cross country program here and this year's state championship team proves that we can compete with everyone. We are very proud of our teams and look forward to more postseason runs and championships.”
Trinity Hall, a not-for-profit 501(c)(3), is an independent all-girls college preparatory high school, educating and empowering young women in the Catholic tradition. Trinity Hall’s core values of leadership, respect, perseverance and faith are foundational to their mission and work as educators. For more information, visit www.trinityhallnj.org.
###
Photo credit: Lynn Retterer, Trinity Hall (both photos)
Published November 15, 2018