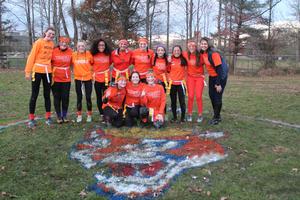 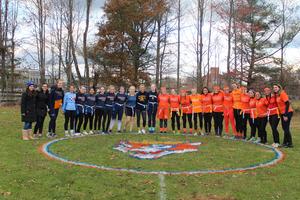 The Purple People Eaters hold onto the championship title for the second year in a row.
The Monarch's Flag Football Tournament only started last year but it has quickly become a favorite event for the school community. All students interested in playing are organized into teams according to their Royal Rumble team affiliation. This year, teams comprised of seniors and sophomores (Team Orange) and juniors and frosh (Team Blue) faced off in a bracket tournament, with the top team from both groups meeting at the championship game on the last day before Thanksgiving break. At stake: major Royal Rumble points, championship rings, and, most important, bragging rights.
For the second year in a row, the Purple People Eaters brought home the win for Team Orange. The team, which included 100% of its players from last year, dominated early and held off the Team Blue comeback in the second half. Organized by the Athletics Council, the tournament was full of teamwork, school spirit, good-natured competition, athleticism, and much excitement from the entire school community.
Thank you to the Athletics Council and the Fathers Club (whose members officiated the tournament) for continuing this enjoyable event.
Published November 21, 2018